Sep 5,2020 Comments Off on Mayor, Execs dine with AMP Capital 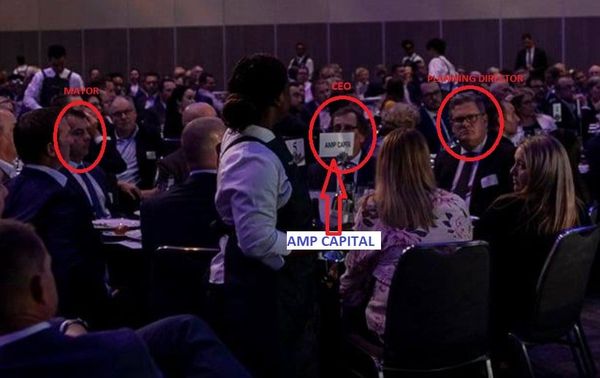 This is not a good look – City of Stirling Mayor Mark Irwin, CEO Stuart Jardine and Director of Planning and Development, Stevan Rodic all in attendance on AMP Capital‘s table (centre front of stage no less) at the Property Council of Australia – WA business lunch on 28 August 2020 where Premier Mark McGowan was guest speaker and attended by Planning Minister Rita Saffioti.

Public consultation only closed on AMP Capital‘s highly controversial Karrinyup West Shopping Centre Towers DA (9, 15 and 24 storeys) on 24 August 2020 and the Stirling CEO and Planning Director will be signing off on the report to recommend refusal or acceptance of the development. Further, the application has been called in to Council so the Mayor will also be voting on whether to recommend support or refusal to the ultimate decision maker – the State Government’s undemocratic Development Assessment Panels.

A smart move by AMP Capital putting the Stirling Mayor and Stirling Execs on AMP Capital‘s table as the get together would not have gone unnoticed – perhaps even by the ultimate decision makers that might have been in the room.

A dumb move by the Stirling Mayor and Execs to accept the invitation.